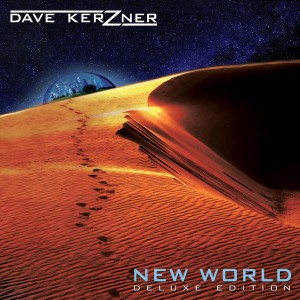 February 9th, 2015, Miami, Florida –  Dave Kerzner, formerly of the band Sound of Contact, has just released an expanded 2 CD version of his acclaimed Progressive Rock debut solo album. “New World – Deluxe Edition” ships world-wide today in an elaborate double disc package with over 143 minutes of music from eSoundz.com in the US and BurningShed.com in the UK. A special “Mastered for iTunes” downloadable version is now available on iTunes and a high quality mp3 & FLAC version is available with pdf booklet on Kerzner’s “Sonic Elements” Bandcamp page.

“All the new songs are placed in their correct order within a concept album.” Says Kerzner “This isn’t just the album plus a bonus disc of outtakes. These are songs that could have been on the main album but there simply wasn’t enough room on one CD. This version has longer intros, outros and segues which gives it a live concert and movie-like feel to the overall listening experience.”

Dave Kerzner was recently voted in the top 10 for 3 categories in Prog Magazine’s Reader’s Poll for 2014 for “Album of the year”, ‘Keyboardist of the year” and “Tip for 2015”!